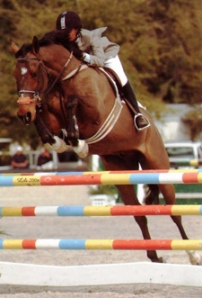 African-American equestrians are the minority within a minority as equestrianism remains an interest among a few people, primarily white. Few women make it to the top of equine sports.

Shayla Wilson is determined to be one of those few. An honors graduate (2008) of Virginia Intermont College, the nation’s top equine university, Shayla was the first African-American on the school’s equestrian team.

“At Florida University I was already an anomaly because I was the only black person on the team. I only started being outcast by certain members once I made it to Nationals, as if they’d realized ‘She’s serious’ or felt entitled, like ‘I was supposed to get that spot!’ I ignored it and mostly dealt with my friends. People like that ruin themselves. The biased coach was eventually fired. I like it here at Intermont and have a great world-class trainer.”

This is Shayla Wilson, and I wanted to say that I appreciate the time and attention Cheryl Williams put into making this article. However, I wanted to clarify that although I did experience racial bias, the coach of the University of Florida Equestrian Team was not biased in any way which is why I was chosen to go to Nationals my freshman year. The coach who recently passed is dear to my heart, because that person always supported my dream of becoming an equine professional.

To Valerie: Actually yes, I am an instructor and horse trainer now. I am the head coach of the Compton Jr. Posse, a not-for-profit group aimed at keeping kids off the streets and on horses. My dream of making it to the Olympics is still very much alive, as I have a great team supporting me here in LA. Thank you for your interest. 🙂