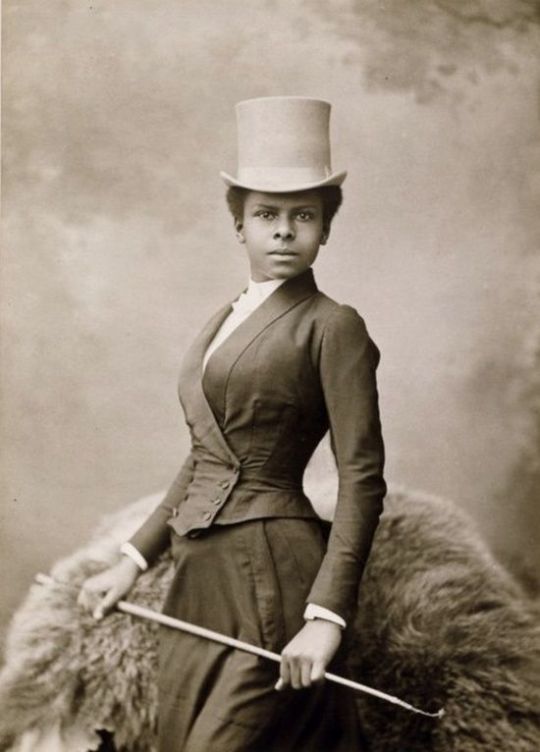 Selika Lazevski, a 19th century equestrian was photographed here by Felix Nadar in 1891 in Paris, France. She was an écuyère who performed haute école – which means she was an equestrian who rode high school dressage in French circuses in the 19th century.

“Selika Lazevski was an écuyère (horsewoman) who performed high level dressage. The écuyères rode side saddle in circuses and hippodromes, and were widely respected for their skills as horsewomen.”

SusannaForrest.wordpress.com sheds more light on the possible origins of her name.

“Sélika is the name of the heroine of Giacomo Meyerbeer’s 1865 opera, L’Africaine, and was adopted as a stage name by the first black woman to sing at the White House, the coloratura soprano Madame Marie Selika Williams. The opera was hugely popular among African Americans, and Selika became a fashionable name. Popular among horse owners too: a filly called Selika won the Kentucky Oaks in 1894.”

About the photograph
A young woman in a period riding habit ~ Photographed by Félix Nadar, the pseudonym of Gaspard-Félix Tournachon (1820 – 1910), a French photographer, caricaturist, journalist, novelist and balloonist.

The photograph, Paris, c.1891, is included in a book called ‘La France Noire’, which is filled with images representing three centuries of black presence in France.

“This photo speaks to the soul of every strong, proud woman of African descent. It embodies our timeless spirit, and everything we are, and can be…in one glorious portrait. I loved it when it was nameless; it stirred my curiosity to no end. I am so pleased that Selika Lazevski’s name, and accomplishments weren’t lost to us.” – Sarah Jackson Browne https://www.facebook.com/SarahAnnetta 7.3.12

Some more Nadar photos of Selika on the French Ministry of Culture’s archive database: